What Really is the Idea of “Spirals in Art”?

Author: Linda Vila
Category: Art, Artist, Nature, Technology
Comments: Comments Off on What Really is the Idea of “Spirals in Art”? 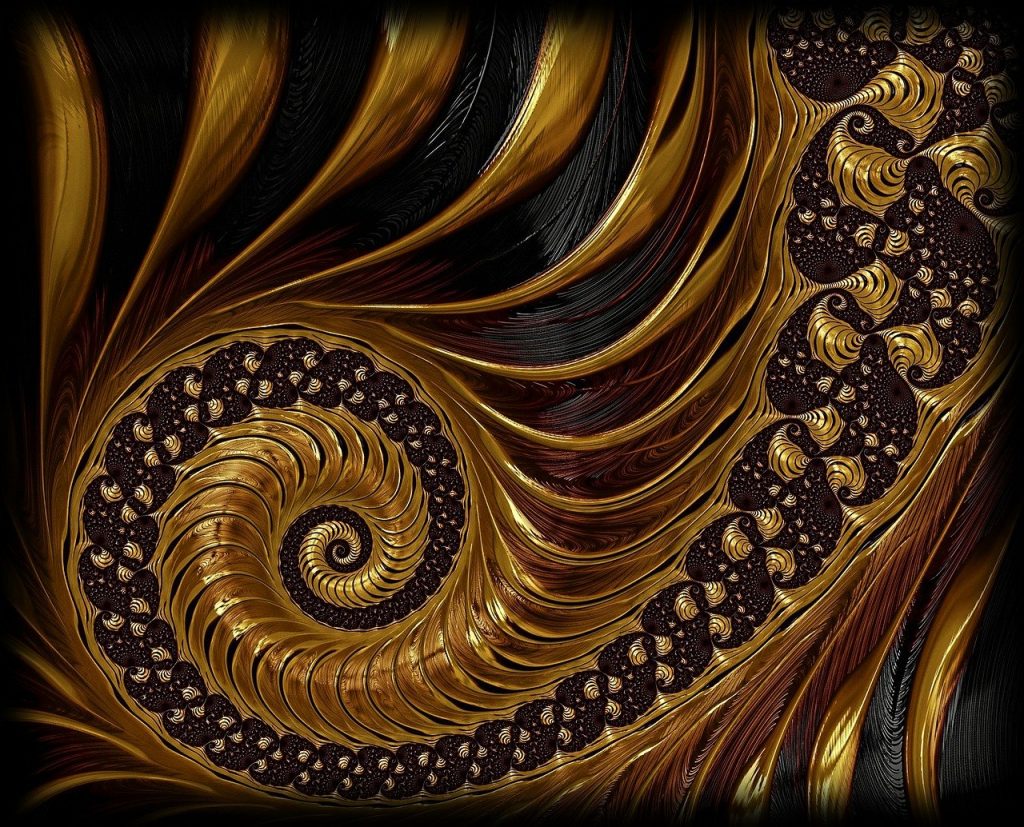 Understanding the Idea of  ‘Spiral Art’

Spirals have always been popular as ornaments. It is even asserted that, there was no epoch in the cultural development of man from the Stone Age, to the present day in which the spiral was not found as a gestalt symbol. The most important reason for the abundant occurrence of the spiral in art is probably the numerous models in nature. The spiral shape often becomes obtrusive when designing movements, for example when drawing or dancing. There is also the theory that in pottery cultures, the spiral was discovered in the creative use of the rotating work surface.

The shapes of spirals were used particularly extensively in ancient Greece. This is reflected, among other things, in the Ionic column, the capital of which tapers in a spiral on both sides. Not only Archimedean spirals appear, but also those that come close to a logarithmic one.

In mosaics, you will mostly find spirals in the form of periodic wave patterns, but figures that resemble the fruit cluster of a sunflower and thus contain numerous logarithmic spirals also appear.

Of course, a large number of spirals can also be found in the field of painting. Many famous artists took a closer look at these forms, such as Leonardo da Vinci, who not only used helical lines and spirals in his pictures, but also in his technical and architectural work.

In his “Instruction in Measurement”, Albrecht Dürer gives an approximation of a circular arc and a point-by-point construction for the Archimedean spiral . Among other things, he uses the Archimedean spiral to design a bishop’s staff. Dürer also dealt with the conical spiral and with such spirals, the radii of which grow more and more towards the outside.

In addition to Vincent van Gogh and Paul Klee, MC Escher also dealt with spiral shapes. His graphics are closely and consciously related to mathematics. Escher’s best-known representations in this context are the spherical oxodromes.

The spiral appears not only in “great art,” but also in film technology, comics, daily life, and also smart phones, where some artists use ‘mobile app development services‘ to create art.

As is often reflected in art, the spiral also has a mystical character. In contrast to the straight line, which symbolizes determined and uncompromising progressive thinking, there is something fascinatingly wasteful about it. Those who follow a spiral do not turn in a circle, but slowly but surely make progress by taking familiar things into account and looking at them from an ever higher point of view. As a symbol of change and return, it stands for many development processes in life or for life itself. The spiral shape can also be interpreted as a symbol for the past and future, for becoming and passing away. In some peoples it is an important part of rituals as body painting or tattoos, which serve to prepare for the path to the afterlife.

Here’s a video to help you understand why art is important.

In the years when scientists failed to convince world leaders about the potential harmful effects of global warming, science had turned to art for support. This spawned the birth of what is known in the art world as “climate change art.” The kind that art activists created to make nations understand the reality of the global warming phenomenon scientists have been warning us for decades. Unfortunately, the phenomenon is now a reality as nations across the globe are now experiencing the harmful effects of climate change.

Why Scientists Turned to Artists for Help

In 2005, American environmentalist and journalist William “Bill’ McKibben wrote an article that drew art activists’ attention. Mr. McKibben explained that if science wants to move forward with meaningful changes, convincing human societies would take more than presentation of scientific facts as those are proofs that require intellectual understanding. This American environmentalist suggested that what they needed to do to tackle the problem is to appeal to the emotional intellect of the people; to which he wrote that the professionals best suited to help them achieve changes are the visual artists.

Although according to The Arctic Cycle art organization, it took quite some time before climate change arts took off because not many artists were quick to heed Mr. McKibben’s call.

According to The Guardian, by 2009, even art institutions have woken to the need to promote “climate change art;” rather than be seduced by the wealthy donors and sponsors who own businesses that contributed to the toxic emissions that speeded up the climate changes caused by global warming.

Still, researchers Christian Andreas Klöckner and Laura Kim Sommer wrote in a 2019 report that for “climate change art” to be effective in bringing about reforms, the message of the artwork must include hope and ideas on how to bring about mass modifications.

Spring and all its colors seemed to bring the freshest air that humans could breathe. Yet unfortunately, it is also the time of year when people suffer from allergic rhinitis and asthma attacks. Scientific data shows that climate change has been causing increases in allergens in the air due to the following reasons:

Climate change is associated with rising temperatures, changes in worldwide weather patterns and increasing airborne pollen levels and duration. These changes have been observed to impact health, including that of allergic individuals.

The protein compositions of pollens and the emergence of fungal spores are affected by aerobiological processes impacted by greenhouse gas emissions and depositions linked to changing rainfall and wind patterns.

The changes in climate can extend the duration by which grasses, trees and winds produce pollens and therefore increase the amount of pollens transported by the aerobiological processes.

In all those occurrences described above, allergic reactions in the form of conjunctivitis, rhinitis and asthma in many American states have been noted. The reports are founded by information connected to the high numbers of individuals purchasing medications for all sorts of allergic reactions. Supplements like the apetamin pills have been found helpful as medications for allergies even if they are primarily being taken as weight-gain remedies.

Author: Bernard Villarreal
Category: Artist, Technology
Comments: Comments Off on Da Vinci was a Versatile Genius Yet Many of His War Machine Plans Failed

Leonardo Da Vinci was the epitome of a Renaissance Man, not only for being a great artist but also for pioneering the concepts of several modern inventions. He was a scientist, an engineer, a mathematician, a philosopher, an architect and anatomist all rolled into one. Yet while some contemporary technologists found some of the italian genius’ concepts doable, most of Da Vinci’s plans for war machines often failed.

Why Da Vinci Was Into Designing Plans for War Machines

Aside from being an artist of high repute, Da Vinci was also famous for being a skilled tradesman who can design and build anything. In 1485, Prince Ludovico Sforza of Milan had hired Leonardo Da Vinci to build war machines, in anticipation of other rulers who wanted to forcibly annex Milan to their kingdoms.

It was during that time that Da Vinci came up with numerous plans to improve the most famous military weapon at the time, the ballista, or what we know of today as the crossbow. One such concept was to improve the shooting power of the ballista by turning the weapon into a “rapid fire crossbow.”Another planned innovation was that of a giant crossbow, a gigantic ballista that would have been big enough to launch cannon balls and fireballs as munitions.

However, Da Vinci’s war machines were never built at all. Historians and engineers later found out that except for the rapid fire crossbow, most of the Renaissance Man’s drawings and instructions for building a specific type of war machine, were destined to fail.

Many of Da Vinci’s war machine plans contained errors in mathematical calculations that were mostly basic, which modern day scholars believe were intentional. That is considering Da Vinci’s mathematical skills in calculating the designs of his other concepts, such as the bicycle, the parachute, the helicopter and the use of solar power, which is just to name a few.

In 2013, a group of modern day engineers were able to build a working prototype of Da Vinci’s “rapid fire crossbow.” On the other hand, present-day engineers who attempted to build Da Vinci’s giant crossbow discovered errors that became apparent, only after the massive weapon was built.

The most notable error that Da Vinci made for a war machine, was that of the armored vehicle or what is called today as a tank. Scholars became convinced that the Italian genius’ errors were intentional, because as exemplified by the tank, the wheels of the contraption were designed to move backward instead of forward.

The belief that the errors discovered in Da Vinci’s diagrams were intentional, was also in keeping with the Renaissance Man’s personality and nature. Historians have found out that the Italian artist was a homosexual as he was not interested in having relationships with women. Yet he was a lover of animals and a vegetarian as well, as reflected in one of his many famous quotes.

”..from an early age I abjured the use of meat — the time will come when men will look upon the killing of animals in the same way as they look upon the murder of men.

While Da Vinci had no choice but to work for Prince Ludovico as a military engineer, he was also a pacifist who believed that sowing fear and terror would be enough to discourage his employer’s enemies from attacking. Perhaps, Da Vinci’s non-violent strategy had worked for a few years, but as history has it, King Louis XII’s Italian War in 1499 succeeded in taking away Prince Ludovico’s sovereignty over Milan .

As an aside, if reading this guest post has piqued your interest in crossbows, you can read more on crossbows here.